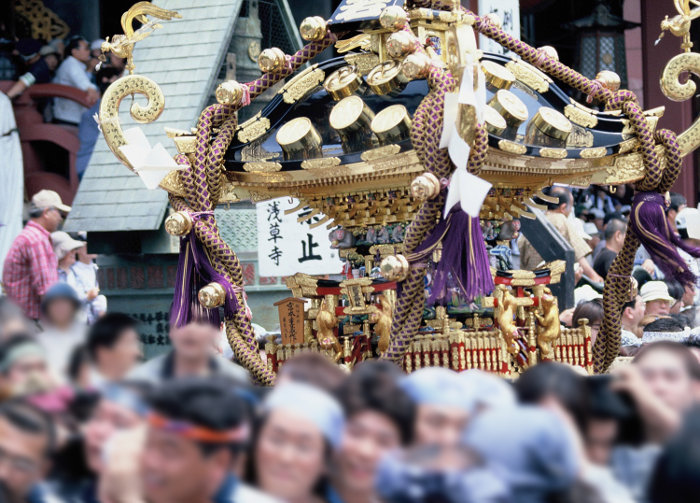 Asakusa Jinja Shrine worships Two fishermen brothers (Hamanari, Takenari, HINOKUMA) and wealthy landlord Hajinomatsuchi, who were involved in the creation of Sensoji Temple.
The annual festival is called the Sanja Matsuri. The Sanja Matsuri is known as the foremost rough festival in Tokyo, and 1.5 million visitors gather in the three days of the festival period. It will be held from October 16 to 18, 2020.
On October 16, after a parade such as accompaniment and dance walks around the city, dedication of “Binzasara Mai” which is the intangible folk cultural property of Tokyo Metropolitan Government will be held.

▲Parades of dance and accompaniment

And on October 18, Carrying of portable shrines of the main shrine will be held, and the festival reach the climax.
The bearers compete for the sticks of the portable shrines, and you can see the sight suitable for the name of “rough festival” exactly.

▲Carrying of portable shrines of the main shrine