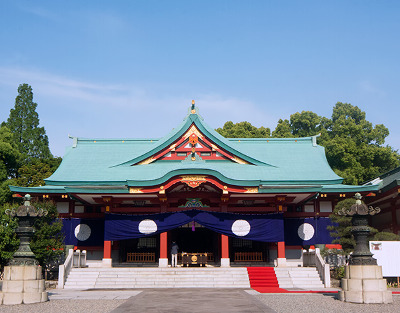 Hie Jinja Shrine was established in 1478 by Ota Dokan to enshrine the apportioned spirit of the Kawagoe Sannou-sha Shrine as the guardian deity of the land of Edo (todays Tokyo), while he ruled it and built Edo Castle. In 1659, it was moved to the current location in the Akasaka district, south of the Imperial Palace.
The shrine holds the “Sanno Matsuri Festival”. It is now counted as one of the three largest festivals in Japan, together with the “Gion Matsuri Festival” in Kyoto and the “Tenjin Matsuri Festival” in Osaka.