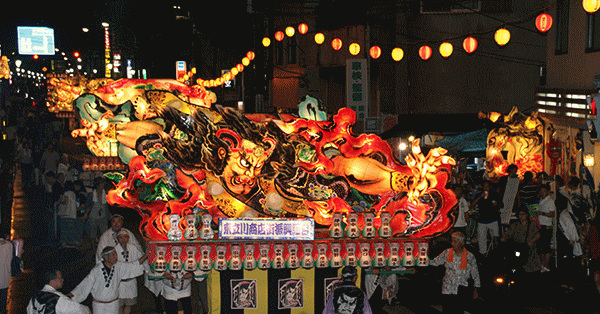 “Hagoromo Nebuta Festival” will be held every year in the middle of August for 3 days at Higashi Tachikawa Shopping Street.
At the Hagoromo Nebuta Festival, in addition to Nebuta made in Hagoromo, “Ningyo Nebuta” (warrior dolls) actually used at Kuroishi Neputa Festival in Aomori will appear.
Kuroishi Neputa’s “Ningyo Nebuta” is smaller than those of Aomori and Hirosaki, but leaves the traditional shape, and the splendid decoration is spectacular.
In the festival, in addition to “Kuroishi Yosare” that is traditional dance in Kuroishi, Yosakoi Soran dance and Japanese drums are also performed.