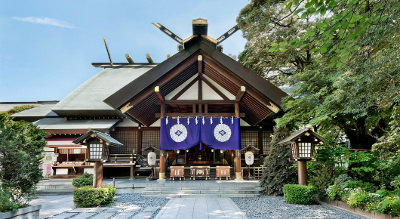 Tokyo Daijingu is affectionately called ‘O-Ise-sama in Tokyo’ because of its enshrined deities. These include: Amaterasu-Sume-Ohkami, the ancestral deity of the Imperial Family and the tutelary deity of all the Japanese; Toyouke-no-Ohkami, the guardian deity of agriculture, industry, clothing, food and housing (both of whom are also enshrined in the Grand Shrine of Ise) ; and Yamatohime-no-mikoto, the founder of the Inner Shrine of the Grand Shrine of Ise. Tokyo Daijingu also enshrines three deities who are in charge of the creation and growth of all things. With the divine power of these deities of creation and growth which includes the virtue of togetherness, Tokyo Daijingu is popular as a shrine for a good matchmaking (marriage).