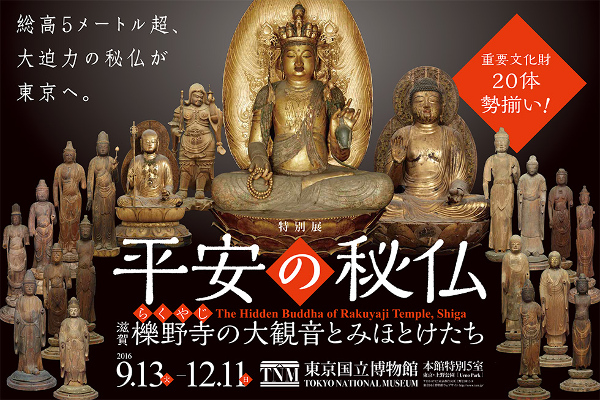 The ancient Tendai temple of Rakuyaji located in Koka city, Shiga Prefecture, is said to have had its beginnings in 792 (Enryaku 11), when Saicho carved a Buddhist image from a sacred oak tree while visiting the area of Ichino (also read Rakuya) in search of materials for the construction of Enryakuji temple. It is a treasury of Heian sculpture that houses twenty figures designated Important Cultural Properties, which is an exceptional number even for Shiga Prefecture, where numerous outstanding Buddhist sculptures still survive.

This exhibition marks the first time that all twenty sculptures will be presented together outside of the temple grounds. 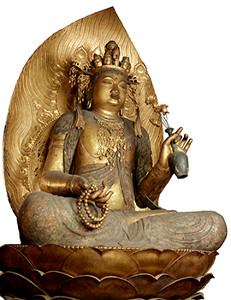 Among them, the temple’s principal icon, the seated Eleven-headed Kannon Bosatsu (Ekadasamukha) measures three meters high and is normally hidden from view. The stately figure, with a sense of gravity, is a masterpiece of Buddhist statuary from the mid-10th century. 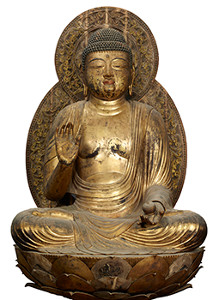 Joining this figure is a seated Yakushi Nyorai (Bhaisajyaguru) that also measures more than two meters high, as well as a standing Bishamonten (Vaisravana) purportedly enshrined by the ancient general Sakanoue no Tamuramaro, and a seated Jizo (Ksitigarbha) bearing an inscription stating that it was made at the wishes of several thousand worshippers. These masterpieces of Heian sculpture from Rakuyaji appear on view together at the Tokyo National Museum. 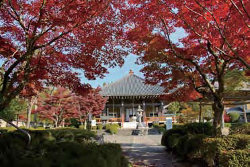 The temple of Rakuyaji appears in essayist Shirasu Masako’s book Kakure-zato (Hidden village), which shines a light on quiet towns somewhat removed from the main highways. The sacred figures will bring to Ueno the mystical atmosphere that still remains to this day in the village of Ichino.